With our different simulator partners and locations, we are completely flexible in offering you a custom-fit solution.

Amsterdam is the capital and most populous city of the Netherlands with a population of 872,680 within the city centre, 1,558,755 in the urban area and 2,480,394 in the metropolitan area. Found within the province of North Holland, Amsterdam is colloquially referred to as the “Venice of the North”, attributed to the large number of canals which form a UNESCO World Heritage Site. Amsterdam was founded at the Amstel, that was dammed to control flooding, and the city’s name derives from the Amstel dam. Originating as a small fishing village in the late 12th century, Amsterdam became one of the most important ports in the world during the Dutch Golden Age of the 17th century, and became the leading centre for finance and trade. In the 19th and 20th centuries, the city expanded and many new neighbourhoods and suburbs were planned and built.

The 17th-century canals of Amsterdam and the 19–20th century Defence Line of Amsterdam are on the UNESCO World Heritage List. Sloten, annexed in 1921 by the municipality of Amsterdam, is the oldest part of the city, dating to the 9th century. Amsterdam’s main attractions include its historic canals, the Rijksmuseum, the Van Gogh Museum, the Stedelijk Museum, Hermitage Amsterdam, the Concertgebouw, the Anne Frank House, the Scheepvaartmuseum, the Amsterdam Museum, the Heineken Experience, the Royal Palace of Amsterdam, Natura Artis Magistra, Hortus Botanicus Amsterdam, NEMO, the red-light district and many cannabis coffee shops. It drew more than 5 million international visitors in 2014. The city is also well known for its nightlife and festival activity; with several of its nightclubs among the world’s most famous. The city is primarily known for its artistic heritage, elaborate canal system and narrow houses with gabled façades; well-preserved legacies of the city’s 17th-century Golden Age. These characteristics are arguably responsible for attracting millions of Amsterdam’s visitors annually. Cycling is key to the city’s character, and there are numerous bike paths. 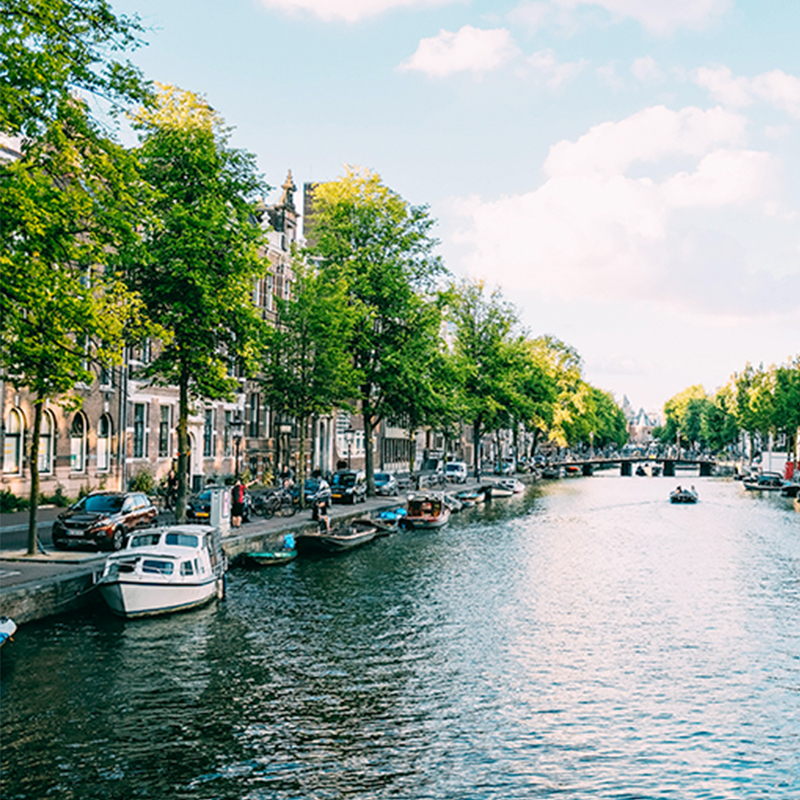 Helsinki is the capital, primate and most populous city of Finland. Located on the shore of the Gulf of Finland, it is the seat of the region of Uusimaa in southern Finland, and has a population of 656,229.The city’s urban area has a population of 1,268,296, making it by far the most populous urban area in Finland as well as the country’s most important center for politics, education, finance, culture, and research; while Tampere in the Pirkanmaa region, located 179 kilometres (111 mi) to the north from Helsinki, is the second largest urban area in Finland. Helsinki is located 80 kilometres (50 mi) north of Tallinn, Estonia, 400 km (250 mi) east of Stockholm, Sweden, and 300 km (190 mi) west of Saint Petersburg, Russia. It has close historical ties with these three cities.

Together with the cities of Espoo, Vantaa, and Kauniainen, and surrounding commuter towns, Helsinki forms the Greater Helsinki metropolitan area, which has a population of over 1.5 million. Often considered to be Finland’s only metropolis, it is the world’s northern most metro area with over one million people as well as the northern most capital of an EU member state. After Stockholm and Oslo, Helsinki is the third largest municipality in the Nordic countries. Finnish and Swedish are both official languages. The city is served by the international Helsinki Airport, located in the neighboring city of Vantaa, with frequent service to many destinations in Europe and Asia.
Helsinki was the World Design Capital for 2012, the venue for the 1952 Summer Olympics, and the host of the 52nd Eurovision Song Contest in 2007.
Helsinki has one of the world’s highest urban standards of living. In 2011, the British magazine Monocle ranked Helsinki the world’s most liveable city in its liveable cities index. In the Economist Intelligence Unit’s 2016 liveability survey, Helsinki was ranked ninth among 140 cities. 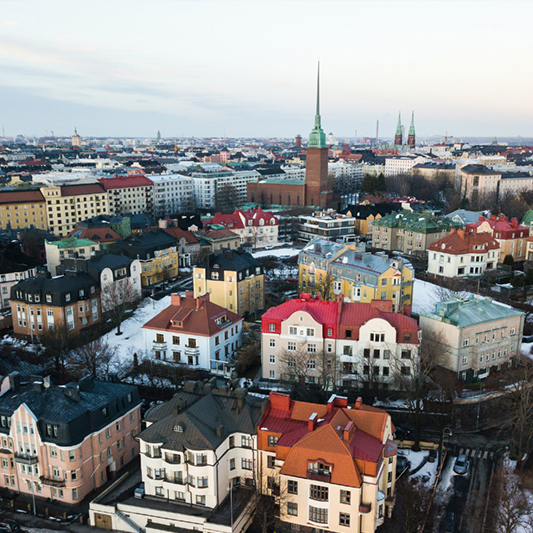 Frankfurt, officially Frankfurt am Main, is the most populous city in the German state of Hesse. Its 763,380 inhabitants as of December 31, 2019 make it the fifth-most populous city in Germany. On the River Main, it forms a continuous conurbation with the neighbouring city of Offenbach am Main and its urban area has a population of 2.3 million.The city is at the centre of the larger Rhine-Main Metropolitan Region, which has a population of 5.5 million and is Germany’s second-largest metropolitan region after the Rhine-Ruhr Region. Frankfurt’s central business district lies about 90 km (56 mi) northwest of the geographic centre of the EU at Gadheim, Lower Franconia. Like France and Franconia, the city is named after the Franks. Frankfurt is the largest city in the Rhine Franconian dialect area.

Frankfurt is a global hub for commerce, culture, education, tourism and transportation, and rated as an “alpha world city” according to GaWC. It is the site of many global and European corporate headquarters. Frankfurt Airport is Germany’s busiest. Frankfurt is one of the major financial centres of the European continent, with the headquarters of the European Central Bank, Deutsche Bundesbank, Frankfurt Stock Exchange, Deutsche Bank, several cloud and fintech startups and other institutes. Automotive, technology and research, services, consulting, media and creative industries complement the economic base. Frankfurt’s DE-CIX is the world’s largest internet exchange point. Messe Frankfurt is one of the world’s largest trade fairs. Frankfurt is home to influential educational institutions, including the Goethe University, the UAS, the FUMPA and graduate schools like the Frankfurt School of Finance & Management. Its renowned cultural venues include the concert hall Alte Oper, Europe’s largest English theatre and many museums. Frankfurt’s skyline is shaped by some of Europe’s tallest skyscrapers. The city is also characterized by various green areas and parks, including the central Wallanlagen, the City Forest, two major botanical gardens and the Frankfurt Zoo. In sports, the city is known as the home of the top-tier football club Eintracht Frankfurt, the Löwen Frankfurt ice hockey team, the basketball club Frankfurt Skyliners, the Frankfurt Marathon and the venue of Ironman Germany. It was also one of the host cities of the 1974 and 2006 FIFA World Cups. 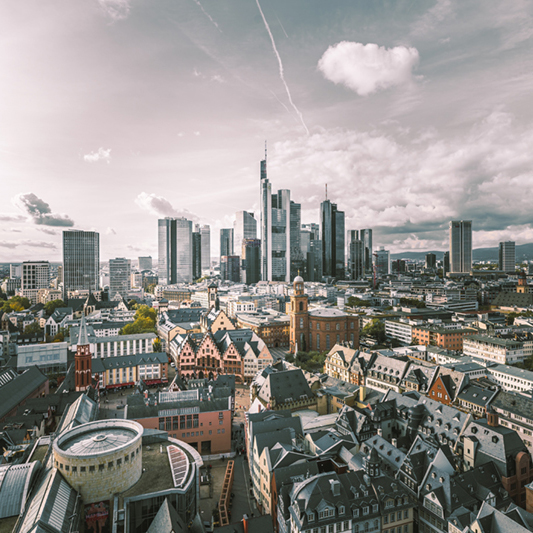 Vienna is the national capital, largest city, and one of nine states of Austria. Vienna is Austria’s most populous city, with about 1.9 million inhabitants (2.6 million within the metropolitan area, nearly one third of the country’s population), and its cultural, economic, and political center. It is the 6th-largest city by population within city limits in the European Union. Until the beginning of the 20th century, Vienna was the largest German-speaking city in the world, and before the splitting of the Austro-Hungarian Empire in World War I, the city had 2 million inhabitants.Today, it is the second-largest German-speaking city after Berlin.The city is located in the eastern part of Austria and is close to the borders of the Czech Republic, Slovakia and Hungary. These regions work together in a European Centrope border region. Along with nearby Bratislava, Vienna forms a metropolitan region with 3 million inhabitants. In 2001, the city center was designated a UNESCO World Heritage Site. In July 2017 it was moved to the list of World Heritage in Danger. Additionally to being known as the “City of Music” due to its musical legacy, as many famous classical musicians such as Beethoven and Mozart who called Vienna home. Vienna is also said to be the “City of Dreams”, because of it being home to the world’s first psychoanalyst Sigmund Freud. Vienna’s ancestral roots lie in early Celtic and Romansettlements that transformed into a Medieval and Baroque city. It is well known for having played a pivotal role as a leading European music center, from the age of Viennese Classicism through the early part of the 20th century. The historic center of Vienna is rich in architectural ensembles, including Baroque palaces and gardens, and the late-19th-century Ringstraße lined with grand buildings, monuments and parks. Vienna is known for its high quality of life. In a 2005 study of 127 world cities, the Economist Intelligence Unit ranked the city first (in a tie with Vancouver and San Francisco) for the world’s most livable cities. The UN-Habitat classified Vienna as the most prosperous city in the world in 2012/2013. The city was ranked 1st globally for its culture of innovation in 2007 and 2008, and sixth globally (out of 256 cities) in the 2014 Innovation Cities Index, which analyzed 162 indicators in covering three areas: culture, infrastructure, and markets. Vienna regularly hosts urban planning conferences and is often used as a case study by urban planners.[42] Between 2005 and 2010, Vienna was the world’s number-one destination for international congresses and conventions. It attracts over 6.8 million tourists a year. 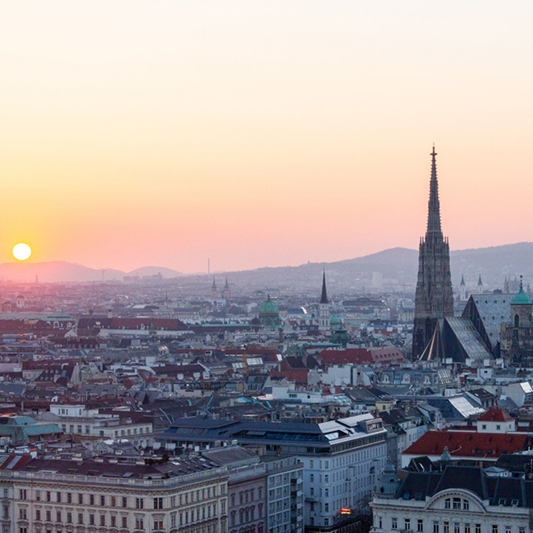 If you need any help or information contact us by phone or email.